A surety is often referred to as a “jailor in the community” because they are responsible for the accused individual while they are out of custody on bail.

Acting as a surety is a serious matter and anyone asked to do so should seek independent legal advice. 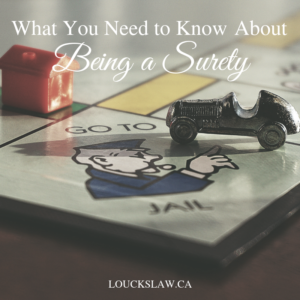 What are a Surety’s Obligations and Responsibilities?

Not all circumstances or bails are the same, so the specific responsibilities of a surety will change on a case by case basis, depending on the specific conditions. However, generally, it is the surety’s responsibility to:

How Do I Qualify as a Surety?

Usually, the accused person’s lawyer will speak with the proposed surety prior to the bail hearing. Often a ‘surety affidavit’ is filled out and signed. This is a sworn document that is presented to the court outlining your relationship with the accused person, information relating to where you live, your assets and income, your history with the criminal justice system, how much money that you could reasonably pledge, and whether you have any knowledge of the charges before the court.

Sometimes the proposed surety will be called to the witness stand during the bail hearing and will be examined and cross-examined on topics similar to those in the surety affidavit – topics such as your finances, background, and personal character.

At the end of the day, it is up to the Justice of the Peace or Judge to determine if you are qualified to act as a surety for the particular accused individual.

What Happens if the Accused Breaches Their Bail Conditions?

If the accused person that you are supervising breaches terms of his or her bail, the following may occur:

Should the Crown ask the court to make you pay the money you pledged as a result of a breach by the accused, a hearing will be scheduled and you and the accused will both be given 10 days notice. This hearing is called an estreatment hearing. At this hearing, you will have an opportunity to explain why you should not lose your money. The judge may order that you pay all, part, or none of your money.

Can I Quit or Resign as a Surety?

Yes. At any time during your period as a surety, you may decide that you are no longer willing to act or supervise the accused person. Resigning as a surety can be done:

It is best practice to attend the courthouse with the accused, and also provide his or her lawyer with reasonable notice so that they may endeavor to find another surety to step in for you. Otherwise, the accused may needlessly be incarcerated while they seek out another surety to fill in.

Acting as a surety is a serious matter that should not be entered in to lightly. Don’t hesitate to contact Loucks & Loucks for legal counsel before you commit.